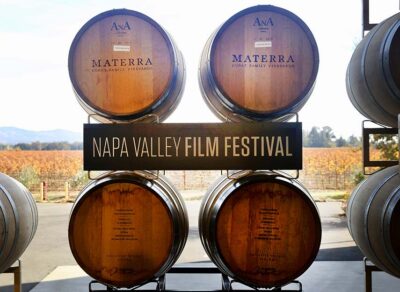 The 9th Annual Napa Valley Film Festival continued their tradition for honoring a handful of up and coming young actors at their Rising Star Showcase. Honorees included Jessica Barden (The End of the F***ing World, Jungleland), Kelsey Asbille (Wind River, Yellowstone), Jacob Elordi (Euphoria, The Kissing Booth), Liana Liberato ( If I Stay, Light as a Feather), Dean-Charles Chapman (Game of Thrones, The King) and Mena Massoud (Aladdin, Run This Town).
Materra/Cunat Family Vineyards has hosted this popular Q & A for the Festival’s Patron Circle Members for the past four years. Warm sunny skies laid as a backdrop to the winery’s barrel room as the six actors were asked about their experience in the acting world so far. Moderator Nischelle Turner from Entertainment Tonight (ET) asked each honoree about their first audition, inspirational words they have received and what role each would like to play.

Actress Jessica Barden was the first to grace the Red Carpet. She joked in the Q & A that she should never wish to look older in the acting business. At age 27, she can still pass for a teenager. Though that used to bother her, she has accepted her youthful glow. Ten years from now she hopes to still be acting.

Actress Kelsey Asbille cut her radiant locks and says she is still getting used to her shorter hair. She looked adorable on the Red Carpet in an outfit that accentuated her small waist. The South Carolina native is the oldest of three siblings. She got her first television role in One Tree Hill as Gigi at age 13. Fifteen years later, she has accumulated a repertoire in both television and film.

Standing at 6-foot-5-inches, Australian Actor Jacob Elordi towered over his acting colleagues. Born in Brisbane, Elordi showed an interest in acting at a young age. His first Hollywood stint was with the Pirates of the Caribbean. During the Q & A, he said he wasn’t afraid to be typecast and accepts roles that challenge him. His latest was the HBO television series Euphoria. He’s currently filming Kissing Booth Two.

Texas native, Liana Liberato started acting at age nine. In 2010, she was praised by Roger Ebert in the Film, Trust, which won her the Silver Hugo Award for Best Actress at the 46th Chicago International Film Festival. Now at age 24, she currently stars in the Hulu thriller, Light as a Feather.

English Actor, Dean-Charles Chapman has been acting since 2007. He is known for his portraying Billy Elliot in the West End Theatre production of Billy Elliot the Musical. Game of Thrones fans might recognize him in Seasons Four, Five and Six as Tommen Baratheon.

Canadian Actor & singer Mena Massoud said his father wanted him to go to school to become a doctor, but after chemistry class he knew his path in life would go in another direction. He called his high school drama teacher and asked for acting lessons. His first big break was playing Aladdin in the movie Aladdin. The Charismatic Massoud wooed the audience at Materra/Cunat Family Winery when he was asked to describe the bag of gifts the winery bestowed on all the actors.